Last Wednesday, we were lucky enough to be allowed to look at the material in the University of Edinburgh Library archive, which is part of the Centre for Research collections.

Amidst the usual gusty East-Coast wind battering the glass roof above us, two ladies wheeled in trolley-loads of original artefacts relating to the life and work of Robert Louis Stevenson. Especially for the non-book historians among us not used to this kind of work, actually getting to touch the archive material, including Stevenson’s original hand-written letters, had us brimming with excitement in our little research room on the topmost floor of the library!

First, we handled a rare 1911 edition of the collected works of Stevenson, searching the introduction for clues on Robert and Fanny’s collaboration – yet in vain. In fact, the introduction mentioned Fanny only once as “the lady” Stevenson married in San Francisco. And that was it. 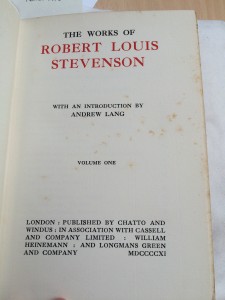 The introduction was written by an admirer of Stevenson as a literary genius and morally grand character, known well in the all-male scholarly society of Edinburgh. While the author of these pages, Andrew Lang, claims to have intimately known Stevenson and frequented the same social circles, his idolization had us seriously questioning the factual accuracy of this swooning introduction.

The most fascinating of Lang’s accounts is in fact on an instance of joint authorship concerning the comedic novel The Wrong Box. Here Lang states from anecdotal evidence that a young man by the name of “Mr. Osborne” assisted the more experienced writer considerably on this project. This did get us excited, as Osbourne was Fanny’s maiden name. Sure enough, on the same page the man is named as Lloyd Osbourne, Robert’s “then very young” stepson, Fanny’s third child from her first marriage. After a little background research, we found out that Osbourne had actually collaborated with Stevenson on three occasions throughout the 1890s.

…But where is Fanny?

In other material, mentions of Fanny were also rare. However, we did come across the trivial fact that “Mrs. R. L. Stevenson” attended the inaugural meeting of the Stevenson Society of America in San Francisco in 1901.

The lack of evidence of Fanny’s involvement in Robert’s writing profession or even her existence came as no surprise to us. Her involvement in Stevenson’s work and indeed her own literary endeavours remain of interest merely to Stevenson specialists until today.

Nevertheless, we gathered valuable contextual information about Stevenson and the immense popularity of his oeuvre even within his lifetime. An interesting assortment of postcards, two of which you can view below, circulated among members of fan groups on both sides of the Atlantic. Further, the collection of Stevenson’s complete works commenced as early as 1895 – merely a year after his death – preserving even marginalized works such as The Dynamiter and short stories. 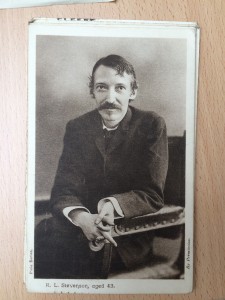 After an hour of mastering the balancing act between meticulous scrutiny of the partially handwritten letters and gaining a comprehensive overview of the Library’s archive material on Stevenson, we neatly preserved the most relevant pages of the Collected Works and some interesting memorabilia, including photos of the man himself, as digital images – enjoy our Photo Gallery !